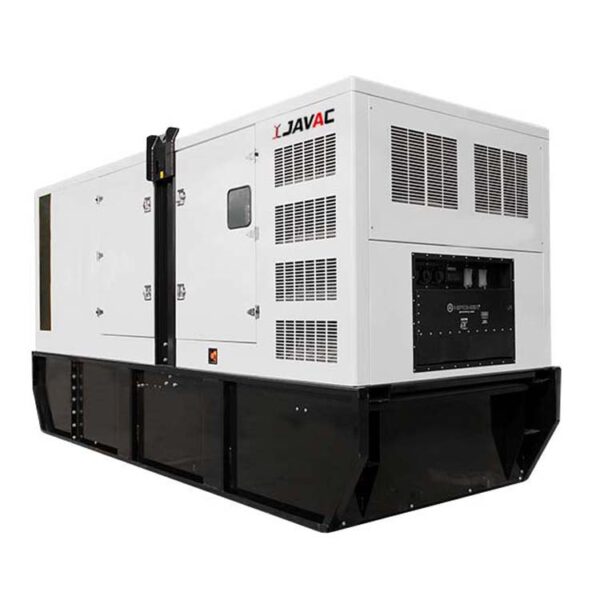 A “conventional wisdom” teaches us that a generator when driving non-linear loads should be provided with a geometric overdimension factor of 2 to 8 x the nominal capacity!
Knowing that this “wisdom” is not based on a fixed guideline and is rather a technical consensus, these recommendations often lead to expensive oversizing of the generator in question.
Even if the oversizing is only limited to a factor of 2 for non-linear loads, this leads to unnecessary installation, operational and periodic maintenance costs, not least because the generator runs underload for a long time!
Non-linear and other electronic loads often require a higher degree of stability in voltage and frequency than, for example, linear loads.
Sometimes it is forgotten that a generator is not an equivalent of a mains power source.
With heavy peak loads and dead moments, it is not uncommon for voltage drops of 5% and more to occur for short periods with frequency fluctuations of around 10 to 15 Hz!
Most users no longer question this!
In practice, this phenomenon of overdimensioning continues to be accompanied by far too high operating costs!
Anyone who invests in our PM technology will get rid of these classic problems!
PM technology offers the best solution for your non-linear loads without compromise & limitations!
From now on, you get rid of the old problems, and the electrical performance is greatly increased.
The voltage and frequency are thus stable, accompanied by a perfect active and reactive output power!
As a result, capacitive and inductive loads are no problem at all for these alternators.
Moreover, compared to the classical electromagnetic alternators, the PM alternators have a noticeably higher dynamics.

This makes the PM alternator a “High-tech” super-efficient and energy-saving alternative that guarantees extremely high and unprecedented performance.
With energy savings of up to +50% (similar applications can now also be seen in PM screw compressors, with the same high energy savings).
The PM alternator is constructed around a stator and field winding in the same way as the conventional alternator.
The armature is made of an ALU alloy, provided with encapsulated high-quality NdFeB magnets, because of this it creates its permanent magnetic field, in contrast to the classic generators where the magnetic field has to be activated.
The housing is compact and uses the same SAE sizes.
A patented motor/alternator connection provides the IP 55, insulation class, which neutralizes the impact of dust and moisture.
Finally, it is important that we are the only ones who have succeeded in applying PM technology to generators without using an inverter, which significantly reduces the price, but also that these alternators are extremely reliable.
Years of intensive research have preceded this technology, resulting in a complete line of PM alternators in 3000 rpm for powers up to 9 KW and 1500 rpm for powers from 13 to 60 KW.
However, the pricing for PM technology is more expensive than conventional alternators, but taking into account that the efficiency of the generator increases by a factor of 50%, resulting in savings on fuel, logistics, and maintenance.
Then this additional cost is negligible, certainly where the problem arises as described above with regard to the non-linear load.

RATED Power, or the power that a generator can produce for an extended period of time, this is the power of the generator as designated power.
Keep in mind that this is 90% of the maximum power, some companies advertise with this power which is pure distortion of competition.
Let’s say as an example that a 4.2 KW generator can give you a power of 4200 + 400 watts = 4600 watts in a short time, this generator is best used for a maximum power of 4000 watts.
So expressed in lamps 40 lamps of 100 watts, also because the usage curve of your motor shoots up at full load.

The “lamps” example is called a RESISTANCE type of load and the POWER required is easy to understand.
Other RESISTANCE types of load include things like toasters, convection ovens, hot plates, curling irons, coffee makers, stereos and TVs.
RESISTANCE LOAD is usually applied in appliances without an electric motor.
Resistance load = 1 x Power.

It is different with the reactive load, which usually includes an electric motor.
Some home appliances such as stovetops and refrigerators have internal fans that run intermittently, so extra power is needed to start the fan.
Another example is power tools.
A REACTIVE load device or implement may require up to three times more power (KW) to START than it needs to run.

The comparison shows the relationship between WATTS, VOLTS and AMPS in a PURE RESISTANCE LOAD.
If you know one of the two variables, the third can be calculated.
Example: You want a generator to power a 1000 Watt floodlight.
The appliance is 220V and requires 1000 Watts of power.
Using the equation, we can calculate that the floodlight will draw 4.3 AMP electrical current.
For Reactive loads, the comparison shows only a general relationship between Watts, Volts and AMP, because the power requirements for REACTIVE loads changes with the Control Conditions.
Reactive load = Volt x AMP = Watt