What is the role of nitrogen

Nitrogen is an essential component of everything that lives and moves on Earth. Without nitrogen, no amino acids or nucleic acids, no metabolism or proteins. The human body contains about 7% nitrogen, making it the fourth most abundant element in the body. After oxygen, carbon and hydrogen. About 78% of the Earth’s atmosphere is made up of nitrogen, 21% of oxygen, and the rest of various other noble gases. Nitrogen is therefore present in large quantities in the air. We do not use the nitrogen that we inhale as humans and we exhale again. However, this nitrogen is very useful for various industrial applications, and in particular in the transport sector.

Nitrogen, chemically indicated by the symbol N (nitrogen gas N2), owes its name to the fact that it can have a suffocating effect on life and on fire In high concentrations, nitrogen has an oxygen-displacing effect. We extract nitrogen by fractionally distilling the air. in other words We split the air and extract the nitrogen. The freezing point of nitrogen is -210°C and the melting point -196°C at normal air pressure. This means that at temperatures below -210°C nitrogen is a solid. This occurs in practice, but less often than the liquid or gaseous form. Between -210°C and -196°C it is liquid. Above -196°C nitrogen gas is obtained. A widely used gas in industry. It is colorless and odorless and, unlike oxygen, an inert gas.

Nitrogen in the transport sector

Research shows that more than sixty percent of motorists and by extension the transport sector drive with tires that have the wrong pressure. Usually the pressure is not compliant. A tire with ‘normal air’ quickly becomes five to ten percent softer over time. Oxygen molecules are so small that they escape through the carcass of the car tire. Nitrogen molecules are larger and hardly escape. Tires that are and remain inflated wear less quickly and ensure that the rolling resistance remains optimal. Thatensures lower fuel consumption An underpressure of twenty percent results in a thirty percent faster loss of yield of the tire. Thirty percent undervoltage even leads to an average 5% higher fuel consumption. You can recognize nitrogen in tires by the green valve cap that is used.

The benefits of nitrogen in tires

Nitrogen in the tires has a large number of advantages, these are achieved by keeping the tires inflated for longer. Tires with nitrogen lose on average 4 times less pressure than tires with air. It is recommended, for tires filled with air, to check the pressure once a month. For tires with nitrogen, 4 times a year is sufficient. In addition to this advantage, there are a number of other advantages related to cost and safety. Below you can read which advantages these are: The molecules of nitrogen are larger than those of air. Because rubber is never 100% airtight, molecules escape through the tire and the tire pressure decreases. Because oxygen molecules are smaller than nitrogen molecules, you can imagine that this process goes faster and the tire pressure drops faster. Because the inflation with nitrogen achieves a maximum amount of 99% nitrogen, the difference seems minimal. As with all substances, nitrogen is subject to the rules of expansion, which occurs during temperature increase, and condensation, when cooled. In practice, for each temperature increase of 8°C, there is a pressure increase of 0.1 bar and vice versa The use of nitrogen keeps the temperature in the tire more constant. In this way, the tires wear more evenly and the rolling resistance is optimal. The rolling resistance corresponds to the energy lost when the tire bulges. The energy loss is due to the continuous material deformation of the tire. The right voltage leads to less energy loss. Oxygen reacts in tires with rubber, water particles and dirt, causing rust on the rim and deterioration of the rubber. Nitrogen stops these oxidation processes. The inside of tubeless tires is provided with a tubeless layer that should make the tire as airtight as possible. However, air molecules continue to escape slowly but constantly through this tubeless layer: this natural process is called permeation. Nitrogen molecules are larger than oxygen molecules, making it more difficult for nitrogen molecules to get through this tubeless layer: eventually both will find their way through the tubeless layer, but it takes nitrogen molecules up to 6 times longer than oxygen molecules.

Another advantage of keeping your tires inflated for longer is that the wear is much lower. A tire pressure of 20% lower than recommended increases tire wear by 30%. Or in the opposite direction a direct besparing van 30% op banden

Nitrogen has been used in the aircraft industry and Formula 1 for many years. An important reason to use nitrogen for aircraft tires and Formula 1 tires is the fact that nitrogen has the (pleasant) property to prevent heat development. Because nitrogen in the tire is a homogeneous mixture, the expansion is a lot less; in other words, the temperature of ordinary air with oxygen increases sharply, especially with prolonged and heavy use. In the transport sector, long-term and heavy use of tires is self-evident. The use of nitrogen prevents heat development, so that the lower temperature results in fewer tire problems, such as tread separation and punctures. This reduces the chance of breakdowns en route, which is very cost effective. One would think that all trucks and trailers are equipped with nitrogen, but in reality there is still a lot of work to be done here. Otherwise, in the aviation sector, money here is an obligation on the use of nitrogen. One reason aircraft use it is that, because there is no moisture in nitrogen, the tires cannot freeze during flight, but they are also more resistant to sudden contact with the concrete runway during landing. In Formula 1 and racing cars are always supplied with nitrogen. Think, for example, of the 24 Hours of Le Mans where it comes to endurance of all parts of the car, it makes sense that nitrogen is used here. Also the advantage for tires on collector cars, which are used less often, so that the tires tend to deform permanently. But also for campers and caravans Recently, there has also been an awareness among private car owners. The cost of a nitrogen-filled tire does not outweigh the disadvantages of ordinary compressed air.

Is nitrogen much more expensive?

Ordinary air is freely available. Nitrogen must be specially purchased in gas cylinders, or made using a nitrogen generator. Both involve an investment that must be passed on. Filling tires with nitrogen is therefore by definition more expensive than compressed air.

But this cost does not outweigh the many benefits

When your tire pressure is lower, your braking distance is longer and the chance of skidding is greater. Nitrogen heats up less quickly than air. This has the advantage that the tires get less warm and therefore the chance of a blowout is smaller. Most blowouts are caused by a combination of heat, age, water, corrosion, and incorrect tire pressure.

Air contains hydrogen, which causes condensation to form in the tire and rim. This causes the metal to oxidize (this applies to both alloy wheels and steel wheels). Oxidation of the metal makes it easier for air to escape between the tire and rim, which causes the tire pressure to drop faster and faster in the long run. . Other advantages of using nitrogen in tires are better and more consistent driving comfort and better handling. The use of nitrogen therefore also increases safety on the road. The use of nitrogen therefore also increases safety on the road. Tire pressure can also increase by using standard compressed air. A final advantage of nitrogen over air is that oxygen and water vapor no longer enter the tire. This makes condensation in tires a thing of the past, which prevents rust from forming on rims. Rust is again one of the causes of air escaping from tires. Nitrogen has a homogeneous composition, which means that it expands less at high temperatures. This reduces the chance of a tire blowout in the event of high or overload. Nitrogen is absolutely not dangerous. Nitrogen is colorless, odorless, non-toxic and cannot burn. There is no additional danger with a blowout. Blowouts are not very common, especially when the tire is filled with nitrogen. When a nitrogen filled tire pops, nothing else happens than when a regular air tire (80% nitrogen, 20% oxygen) bursts. There is certainly an advantage of nitrogen in the event of a fire hazard. If, for example, a brake jam causes a fire and the tire bursts, the fire will be extinguished rather than rekindled. A fire needs oxygen Due to the dose of nitrogen in the tire, this will neutralize the fire, in contrast to oxygen, which actually fuels a fire. Finally, unlike oxygen, nitrogen is not combustible. This is especially beneficial when you transport dangerous goods. An additional advantage is that there will never be damage to the steel cord layers of the tyre, which is beneficial for tires that are retreaded, and here again the risk of a blowout is greatly reduced.

Compressors, even in tire plants and in many transport companies, are not always equipped with a condensation dryer (note that so-called water separators have a very minimal effect) that should remove most of the moisture from the compressed air. As a result, the compressed air contains a lot of water vapour, especially when the ambient air is warm (summer). This water vapor has 2 adverse effects:

Moisture in the compressed air accelerates the build-up of valves, TPMS sensors and rims

Moisture in the compressed air amplifies pressure variations due to temperature fluctuations. Every gas expands when it gets hot and contracts when it cools: ordinary air has a deviation of 1 PSI per 12 degrees Celsius. Tires get warm from the ambient temperature, the sun, and driving : a decent ride can heat your tires up to 80°. It is therefore always recommended to check the tire pressure ‘cold’ (in the morning, before departure).

Pumping up with 99% purity nitrogen reduces the natural pressure compared to air containing oxygen (without external influence). In addition, nitrogen is a stable type of gas that reacts less to temperature increases caused by rolling resistance. The tires can handle high speeds on circuits, among other things, without affecting the power; in short, in every situation, this improves the performance and lifespan of our expensive tires. 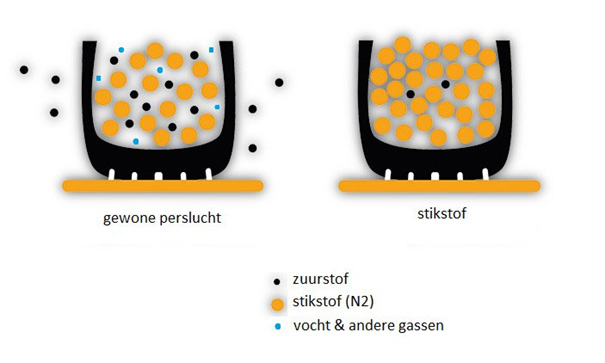 Can you mix air and nitrogen?

Suppose you have nitrogen in the tires but notice along the way that your tire has too little pressure, can you top it up with normal air? Yes, that’s possible. Of course, the effect of nitrogen is diminished by mixing, but it is certainly possible. It is recommended that you always fill the tires with nitrogen and consult a tire specialist if the pressure is too low. A tire center that respects itself a bit will almost always be able to fill your tires with nitrogen.

Nitrogen and the environment

How is the tire filled with nitrogen?

Never use a vacuum pump to prepare your tires for nitrogen use, as this can seriously damage the internal structure of your tires.

If you have any questions, don’t hesitate to contact us.

Curious about the possibilities?

For those looking for affordable quality. Please feel free to contact us to discuss the possibilities.