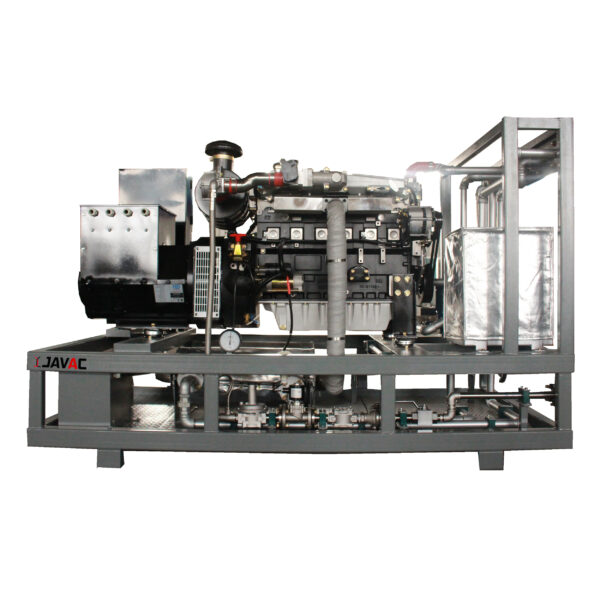 Our CHP installations are manufactured by a partner with ISO 9001 quality assurance, ISO 14001 environmental management system certification, and OHSAS18001 health and safety system certification, and of course our products are also CE certified.
It is important to work with a reliable company, all the more so that CHP installations require a significant investment and are often operated 24/24/365 continuously.
The range is available in 2 energy carriers, on the one hand there are the diesel versions and on the other hand there are the gas versions, the latter can be offered in natural gas, biomass gas, butane gas and LPG.
The CHP installations are offered in a range from 6 KW to 500 KW, there is a selection of well-known brands in engines, including: Isuzu, Perkins, Cummings, Baudouin, MTU, etc., for the alternators you can choose between Mecalte , Leroy Somer, Stamford, who give you a guaranteed stable output with a good third harmonic, so you can connect sensitive equipment without any problems.
​As is known, 60 to 70% of the generated energy is lost in heat that is released to the environment, by equipping the generator with a heat recovery with a heat exchanger on the cooling water, and heat recovery on the exhaust provided that an insulated jacket can be used for a maximum of converting this “lost” energy into “heat” for various residential or industrial applications, achieving more significant energy savings and contributing to the environment.
CHP installations are often used in greenhouse cultivation, where CO2, electricity and heat are recovered.
In addition, there is fiscal and other support from the (regional) government, but also smaller applications, eg in combination with solar panels and a storage battery for residential applications, or eg for cooling installations, where a heating process is also in operation in addition to cooling.
Javac can take care of the complete installation, ranging from installation and commissioning of the CHP, as well as the complete control to external components.
If you are interested in a CHP installation, we propose to send a brief description of your existing situation and the application you propose, so that we can make you an appropriate offer.
On our CHP page we present you some CHP installations in ranking from 12 to 80 kW, equipped with a gas engine, but other projects are also welcome, also for installations abroad.

CHP, HOW DOES IT WORK NOW?

General framework
When it comes to energy, electricity is initially thought of. However, the vast majority of energy is not electricity, but heat.
Traditionally, electricity and heat are produced separately.
The joint generation of these 2 forms of energy using cogeneration, (CHP).
However, this offers a number of significant advantages, as described below.
Heat and electricity are both forms of energy, but not equivalent.
For a good comparison, we take into account the convertibility of energy into another form of energy.
Please note, not all forms of energy are fully convertible into other forms of energy.
We use the terms “exergy” and “anergy” for this.
​Exergy is that part of the energy that is completely convertible into another form of energy; on the other hand, anergy is the part that cannot (any longer) be completely converted into another form.
It may be clear that exergy has a greater value than anergy, it is therefore desirable that this exergy is used economically.
Electricity is a fully convertible form of energy, for example from mechanical energy, to heat, … and therefore consists of 100% exergy.
Heat, on the other hand, is a lower quality energy form that can no longer be completely converted into another form of energy.
Heat therefore contains anergy in addition to exergy, and the proportion of anergy increases as the heat decreases.
Heat and electricity are often produced separately, i.e. each form of energy is generated by a separate installation.
Electricity, unlike heat, is easy to transport.
Production often takes place remotely, in large thermal power stations.
The power is then brought to the end user via the high-voltage grid.
Heat, on the other hand, is usually produced on site, using a boiler or boiler.
There, the energy of the fuel is converted into heat via a combustion process.
This heat is usually required at a relatively low temperature.
This means that the energy from the fuel is converted into heat with a large amount of anergy.
In the light of the most efficient use of fuels (oil/gas), this is unfortunately a regrettable finding, as precious exergy is lost.

​The principle of CHP
Combined heat and power (CHP) is an energetic process that contributes to limiting exergy losses in heat production.
In this process, heat and electricity are produced in the same installation. In view of the fact that heat is difficult to transport, this installation is located close to the heat consumer.
The high-quality heat that is released when the fuel is burned in the engine of the generator (electricity generator).
After this, the low-value residual heat (the temperature of which can range from 80 °C to 500 °C) is left over, and it is then used to meet the specific heat demand of a company, a hospital, .
So it can be said that a CHP is a smart way to generate heat, which results in a much higher exegetical efficiency.
Heat is indeed the most important factor, and it is therefore essential that this heat is used effectively.
That is why a CHP is preferably dimensioned according to the heat demand.
Electricity generation is used to produce the heat at the desired temperature, which means less exergy loss and a more rational use of energy.
The principle of cogeneration can be further extended by also considering trigeneration.
In addition to electricity and heat, such a unit also produces cold.
An absorption cooler is used for this, in other words the heat is used in such a machine to produce cold.
When the heat demand decreases in the summer, the CHP can still continue to run and use its heat to meet the demand for cold.

The strengths of CHP
The big advantage of a CHP is that with a joint generation of heat and electricity, the available resources are used much better.
As a result, less fuel is required with co-generation than with separate production of the same amount of heat/electricity.
It is known that the reserves of fossil fuels are limited, the message is to use them sparingly.
In this respect, CHP is of course an interesting technology.
Most CHPs work on fossil fuels, but it is also possible to use renewable energy sources as fuel, just think of biomass or biogas.
Such an application offers a double advantage: not only is an environmentally friendly fuel used, but it is also optimally used.
Less fuel consumption also means that CO2 emissions and the emissions of other harmful substances (soot, NOX, SO2, CO) are reduced.
The listed substances occur in increasingly higher concentrations in air, water and soil.
Its impact on the environment, atmosphere and climate is considerable, just think of the greenhouse effect and the ozone problem.
The European Union’s climate policy has set three targets for 2020, known as the “20-20-20” targets.

A CHP installation can make a contribution here.
An increase in the number of CHPs will also ensure that electricity production shifts from central production to decentralized production.
This will lead, among other things, to a relatively strong reduction in losses in the high-voltage grid.