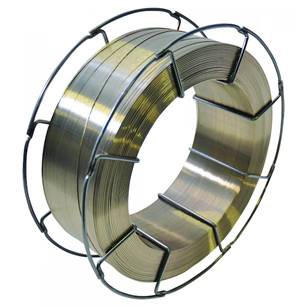 The revolutionary (URRS) Nanotechnology is applied to our new type of welding wire SG-2/NM, by laying a 5 NM oxygen repellent film over the surface of the bare wire just after it comes out of the wire drawing without any protection against corrosion, this has a significantly better effect against rust formation than the conventional coating with a layer of copper, obtained by copper evaporation on the carrier (surface welding wire).
This eliminates the negative effects on copper coated welding wires.
Thus, among other things, the processes of heavy toxic manufacturing processes are eliminated, i.e. washing and treating the drawn wire with highly toxic and alkaline acids, etc.
The neutral welding wire developed by us, with a coating of 5 nm, does not require this treatment and protects not only the environment, but also the health of the welders, due to significantly less welding fumes.
The anti-rust performance of the surface is clearly better, because absolutely no copper traces are introduced into the weld seam, this completely eliminates the interaction between carbon steel and the (minimal) copper film, so the anti-rust performance significantly exceeds the copper-coated welding wire.
The well-known phenomena of stalling welding guns, whose spirals become contaminated by copper dust caused by the drive wheels, are now a thing of the past.
The excellent wire feed performance translates into a welding torch that is completely unaffected by vibrations in the handle.
The fact that the welding wire surface has no copper insulator is covered, there is no clogging of copper dust.
The stable wire feed can be maintained for a much longer time.
The working environment of the employees has been greatly improved.
Significantly less to virtually no spatter behavior is observed, also note that the welding drop that forms is much more stable, giving the weld pool an optimal result, the spray ARC range is already reached at a lower amperage, resulting in an almost perfect weld, even for non-pulsating mig devices, but especially the environment benefits from this due to less stress during the manufacture of the welding wire than when processing this welding wire.
The additional cost compared to the conventional SG2 welding wire is often recouped by, on the one hand, a much better welding seam, and by reducing the footprint on our environment.